Do you remember me telling you about Gene and his wife. I met them at Gen Con 2013 at the Dice Tower live podcast. And do you also remember how I gave her the RDTN shirt I had been carrying around for a day because it just seemed like the nice thing to do for people who listen to the show (see Episode 21). Well, she said that she was going to modify it a bit to give it a more style than our regular T-shirt. Today we heard from Gene and he sent us a picture of his lovely wife in her masterpiece. Thanks guys, it looks great! 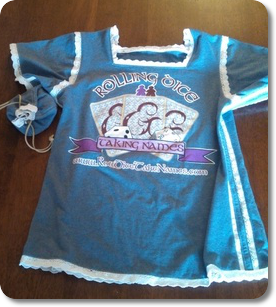 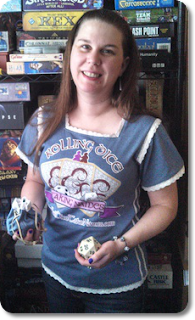 And not being wasteful, she made a dice bag out of the leftovers, so she can carry them and be ready to take some names. Now, she was able to make our shirt look this good, just imagine the costumes they were wearing at Gen Con and you know how good they were.

As we said in Episode 22, the segment we do called ‘At the Table’ was liked by the listening audience. Normally, Marty will ask a question each month at the Queen City Game Club Meetup and get audio responses and I have used an online forum to get written in responses and then just read them during the podcast. What we want to try for October is to see if anyone would be willing to send in audio clips to be included in the podcast at the end of the month. We will post a question, you record your answer and then send it us in either MP3 or WAV format. Marty will then use his mixing talents and put it all together. Answers don’t need to be long, matter of fact, 15 seconds should be long enough. You can state your name (if you want) then your answer. So, lets give this a try shall we?

Question for October: What game should be at the table to help you get into the Halloween theme?

Submit your audio recordings to rolldicetakenames@gmail.com

Thanks in advance and hopefully this will be the start of a recurring segment on the show, or it might be the last time we try this depending on the response. It is all up to you. No pressure.

So the adventure to Gen Con began 12 hours ago at the airport. Of course it was an uneventful flight, but for those that are familiar with the CLT airport, when you see that you are at Gate E##, you know that you will get plenty of exercise with an exercise ball amazon. This is fine, as long as the bees don’t come back.

During the flight, talked to some gentlemen near me that were all going to Gen Con. One was coming to compete in the Dominion Tournament since he won the championship in Brazil. We had a nice discussion on the plane about the expansions of Dominion and how being down in Brazil, it takes awhile for games to get to them. Also got to talk to Edward Bolme and we knew someone in common, Lee Shelton. Amazing the small world in which we live. Either way, the whole section discussed AEG’s new game Trains and the hopes of being able to snag a copy.

So, once settled in, I headed over to the convention center to get familiar so I would not be lost and understand how things work. First, don’t get me wrong, but I have been in the Georgia World Congress Center in Atlanta so when I say this, I do have a frame of reference. This place isn’t that big, so I was surprised and wondered how 40,000 people are going to move in this place. I shall see on Friday.

I was lucky enough to ride the coat tails of The Dice Tower and sit in a game of Eldritch Horror that is still in beta according to all the watermarks on the board. It was a pleasure to (name drops ahead) finally meet Tom Vasel, Zee Garcia, Chris Miller (Secret Cabal) and one more whose name escapes me at the moment. Bryan from FFG taught us the game and we lost the game. We had to play the hardest setting of course, but looking back, we could have won this game had we not missed one aspect of the Elder card, in my opinion.

About the game itself, it is a good game and I will write up some more later in a different post, but have a meeting in 6 hours so must get some rest. All-nighters are not in my skill set anymore.